The french navy at Toulon (France) reconverts its refrigerating systems 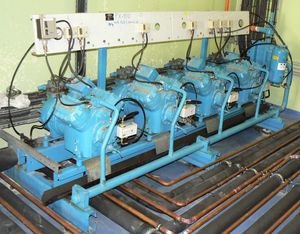 Last July, the 'DCM - Direction du Commissariat de la Marine' (French Government Department for the Navy) undertook a reconversion from R-22 of both its refrigeration plants servicing the central kitchens at the naval base. This selection addressed the ecological environmental aims of the 'DCM'.

The problem solution envisaged by the technical support services of Climalife for carrying out the reconversion work, was to charge the two central plants with R-427A (Forane FX 100) and to replace the Suniso 3GS oil with the polyolester oil, Mobil Arctic EAL 32.

The plant consists of a direct refrigerating central plant and an indirect passive central plant, both dating back to 1995. The two plants are equipped with Copeland compressors with a refrigeration output rating of 117 kW and 10 kW, respectively.

Reconversion work was initiated with the replacement of the mineral oil by the adapted polyolester oil. The filters were replaced at the air intake of the compressors and after re-starting the direct plant with the R-22 and the polyolester oil, the team then proceeded to extract the R-22 refrigerant and the oil from the central indirect refrigerating plant by means of two drain-downs. The dehydration filters were changed and the air intake filters of the compressors were removed, and 360 kgs of R-427A were charged together with new polyolester oil. Then finally, the necessary regulating adjustments were carried out. The two plants have been working most satisfactorily for two months.

On the basis of this experience, the Department of the Navy is intending to undertake other reconversions of other R-22 direct refrigerating plants to R-427A (Forane® FX 100).